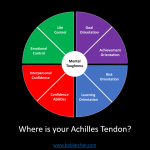 We all have a Mental Toughness Achilles Tendon

I come across a lot of people who seem to be fairly mentally tough but with “specific” issues or weaknesses; and it’s often the weakness that “let’s them down” in difficult situations.

Mental Toughness is defined by psychologists as, “A personality trait which determines, in a large part, how people respond to challenge, stress and pressure, irrespective of their circumstances”

Mental Toughness is made up from four key elements; called the 4 Cs – Control, Commitment, Challenge and Confidence.

Each element is made up from two “components”

Control is made up from Life Control & Emotional Control

Commitment is made up form a Goal Orientation & an Achievement Orientation

Challenge is made up from a Risk Orientation & a Learning Orientation

The Mental Toughness Questionnaire MTQPlus is an extremely important and useful tool in identifying areas for developing your Mental Toughness; it measures both your “overall” Mental Toughness and each of the eight sub-components – all on a scale from 1 (very low) to 10 (very high).

Imagine someone with eights and nines (even tens) everywhere (Life Control, Achievement Orientation, Confidence in Abilities, etc), except for Emotional Control; even if the person has very low levels of Emotional Control; their overall Mental Toughness will come out in the high zone; not necessarily a nine or ten but probably an eight – which sounds very comforting.

Clearly, someone with the above profile will probably be out there looking for and taking on challenges, they will probably set themselves clear objectives and be determined to succeed and they will probably be confident in their abilities; however …………………..; however, when it all start to go horribly wrong, their lack of Emotional Control can become a real handicap – shouting, tantrums, name calling and, possibly, even worse.

Emotional outbreaks are normal, we all have to face situations that get “the better of us” and “letting off steam” is not always a bad thing, however ………………………..; however, when it becomes regular it can start to tarnish your reputation.

I have focused here on low Emotional Control, but we all have our Achilles Tendon; someone could have high scores everywhere except in one of the other elements; very low Risk Orientation or very low Interpersonal Confidence, etc.

They will not show the same behaviours as someone with low Emotional Control, but each “low” will manifest itself in some manner, particularly in difficult or stressful situations, and hinder optimal performance.

If you would like to get under the surface of your Mental Toughness and identify the impact of your “highs and lows” on your personal effectiveness, your wellbeing or your performance, do not hesitate to contact me: boblarcher@boblarcher.com