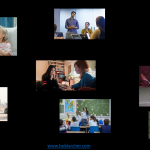 Mental Toughness is not something you can see; it’s a mindset or an attitude – it’s something that goes on in our head.

However, those with high Mental Toughness; i.e., those with relatively high “scores” in all of the eight sub-dimensions, tend to have a certain way of behaving.

The image of the mentally tough, as emotionless, square jawed individuals impervious to the outside world is a myth; most mentally tough people tend to be sociable with lower anxiety levels than others; they are able to remain calm in difficult situations and have a high sense of self-belief in what they can achieve. Not only that, but they generally have both higher aspirations than the less mentally tough and higher wellbeing.

This is my description of someone with high Mental Toughness.

The film, “Twelve Angry Men” is an excellent example of someone incarnating their Mental Toughness. The “hero” (Henry Fonda) of the film, despite personal and almost physical attacks, stays focussed on “why he is in the jury room”; he is patient, empathic, takes risks and shows his doubts without being condescending, arrogant and critical.

Low Emotional Control can lead to emotional outbursts at inappropriate moments, low Achievement Orientation can lead us to becoming side-tracked by other demands, low Learning Orientation can mean we repeat the same, or similar, mistakes, etc.

Being mentally tough is a real game changer; at the individual level, at the team level and at the organisational level.

If you are interested in exploring your Mental Toughness or that of your team or organisation, do not hesitate to contact me at boblarcher@boblarcher.com