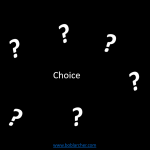 “Choose or not to choose, that is the choice”

I don’t know about you, but I didn’t choose to be here; I was born in 1954 in London in the UK. It just happened to me, one day I wasn’t there and the next day I was, nobody asked for my opinion and I had absolutely no choice in the matter; it was “forced upon me”.

With a bit of luck, I still have a good few years ahead of me; however, when the end comes I probably won’t be asked and I probably won’t have much choice but to go; one day here and the next day not.

Between those two “non-choices”, there is a time-span of about 80 odd years.

Sixty years is not a lot in terms of humanity but it’s all we have. I am aware that some religions believe that we get a second (or even a third or fourth) chance at life, but what interests me is the “one in hand”.

Many (most?) people live in “horizontal” or chronological time where things tend to happen “to us”; from baby to child, from child to adolescent, from adolescent to adult, from adult to parent, etc. with many “unconscious” choices on the way. Drifting in and out (or staying put) in jobs for no particular reasons, changing partners without really thinking, finding yourself with an unwanted child, etc.

Then there are those people who live in “vertical” or “in the moment” time where they “seize” the opportunity or the moment and make “conscious” choices. Deciding what you want to do with your life, deciding to leave your job and work for yourself, deciding to start a family, etc.

Unless you are a Zen Monk it’s maybe it is unrealistic to spend all of one’s time living “vertically”; most people have moments of self-awareness, reflection and stillness but these are often quite fleeting and hidden between the vast amount of “eating, drinking and being merry”.

However, it is invariably our conscious choices which enable us “verticalize” and accelerate the movement towards becoming “who we are”.

Where do you spend most of your time?

To finish, here are some quotes I like around “choices”

“Morality may consist solely in the courage of making a choice.” – Leon Blum

“Man has a choice and it’s a choice that makes him a man.” – John Steinbeck

“When a man cannot choose, he ceases to be a man.” – Anthony Burgess

(Note: man was in the original quotes)