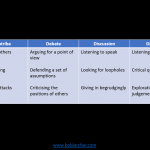 Diatribe, also known as “Ad hominem attacks” is when someone attacks the character, motive, or some other attribute of a person making an argument rather than addressing the substance of the argument itself.

Diatribe is the “nemesis” of dialogue; the latter is listening with empathy, searching for common ground, exploring new ideas and perspectives. Whereas diatribe is about drowning others out, belittling people, name calling ………….

I grew up with the old adage, “sticks & stones can break your bones, but words will never hurt you“; however, it is not as simple as it sounds.

So, here are some suggestions to help you maintain dialogue in the face of diatribe

The first thing to keep in mind is the fact that you have your idea or arguments and the others have their ideas or arguments; don’t fall into the trap of thinking that you have the “only” valid argument i.e., keep an open mind.

The second thing to keep in mind is that when people criticise you personally, it’s usually because they can no longer criticise your arguments or your reasoning; i.e., you are probably on to something!

Having kept all that in mind, some suggestions for when you are in the storm of diatribe:

It may sound obvious, but when you are putting forward an idea or an argument, make sure you know what you are talking about, make sure you have facts and figures (not just feelings and hunches) that you can use to support your arguments.

Think about who you will be exchanging your arguments or ideas with and imagine the questions they may ask. Then, either build answers to the questions into what you are saying or save the answers until asked.

You do not need to say, “it’s only my opinion”, “it’s my opinion” will suffice

Do this “assertively”, not “aggressively”

Be wary of using wit & repartee

Being clever and “sparring” with words is a double-edged sword. If you are good at it, you can show up weaknesses in someone’s counter arguments, if you are bad at it, you can quickly find yourself in an attack & defence spiral with you falling into the trap of using diatribe.

Preparing yourself is as almost, if not more, important in preparing your arguments; especially if you know that your ideas are going to meet with resistance.

Imaging yourself in the room, imagine the counter arguments, imagine the people criticising you, imagine how you will be feeling – and prepare yourself for that.

It’s not easy and we can all “loose it” on occasions; we can momentarily “switch off” and loose the thread, we can get carried with giving too much supporting information, we can listen less to someone because we consider that they don’t know what they are talking about, etc. We all have our “preconceived ideas”, our “certainties”, our “truths” and putting them to one side is difficult; the first steps are recognising that they exist and that others also have their preconceived ideas and truths.

A final recommendation; watch the film “12 Angry Men” – the film is an excellent example of maintaining dialogue in the face of diatribe.