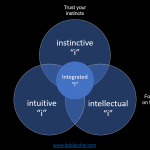 When you say “I have decided”, which “i” is it that has decided?

Is it your intellectual “i” that has reasoned, calculated and measured?

Is it your intuitive “i” based on intangible patterns & cues and previous experience?

Is it your instinctive “i” driven by an unlearned, inborn set of complex reactions?

Or, is it your integrated “I”? A decision that incorporates instinctive reactions, intuitive clues and intellectual reasoning?

It is not always easy to differentiate between the different types of information in “the heat of the moment”; the different parts of the brain do not operate independently of one another and there are numerous interconnections through which they influence one another.

Our instinctive and intuitive responses are based more on past experiences, as opposed to the intellectual response which is based on an “analysis” of the here & now

When the unexpected happens; you will have instinctive, intuitive and intellectual reactions.

Our instinctive and intuitive reactions are almost instantaneous, whereas our intellectual reaction takes slightly longer. Although the mind can learn to ignore emotional messages from the brain, the body’s warning signals don’t. This means that the emotional brain will continue to function regardless of our rational brain telling us that “everything is ok”.

No one perception is more important than another, you need to integrate all three in order to react appropriately.

To do this you need to hold on to “calm”! Part of the initial instinctive response to potential danger is fear and the secretion of small amounts of adrenalin, “just in case”; if panic sets in more adrenalin is released, this will actually impair your ability to think rationally and you will only have two sources of information available

Listen to your intuitions – yes