Leading from the dark side 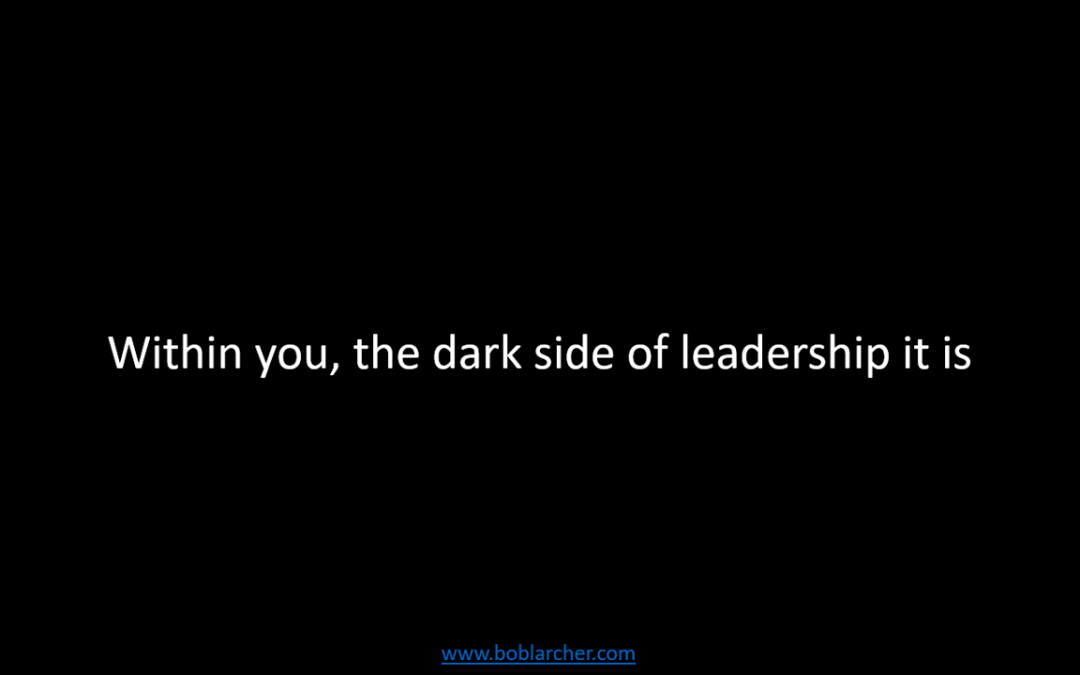 I saw the first Star Wars film when it came out in 1977; I enjoyed it, but nothing more. I liked the idea of the Jedi Knights and the Sith Lords, reminded me of the Lord of the Rings which I had read some years earlier; Sauron (chief lieutenant of the first Dark Lord, Morgoth) representing the Sith and Gandalf (a member of the Istari order) representing the Jedi.

Star Wars also resonated with my childhood reading; I was born in the mid-fifties and grew up on UK comics such as The Victor & The Hotspur and their tales of noble men involved in heroic battles and daring deeds; King Leonidas and his 300 Spartans at Thermopylae, Raglan and the Light Brigade at Balaclava, Custer and the 7th Cavalry at the Little Big Horn and Coghill & Melvill saving the Queens colours at Isandlwana to name but a few.

Ten years ago my, then 9 year old, son discovered Star Wars and wanted to watch the videos; by that time episodes I, II and III had been released and I watched all six episodes with him over a period of about a month; I never gave away anything – the fact that Obi Wan was Vader’s mentor, that Vader was Luke’s father, that Leia was Luke’s sister, the Anakin would be redeemed, not a word.

I found the series fascinating; Anakin’s slow slide from being a promising Jedi to become a powerful Sith lord and back to redemption rang all sorts of bells in terms of leadership. Even great leaders have a dark side; stories abound with regards to people like Kennedy, Martin Luther King, Ghandi, Nelson Mandela & others; maybe there is some truth in them; we all have a dark side – even us! We are all tempted by power, possession, pleasure, etc.

The dark side has been around for centuries in fictional characters; Arthur & Morgan, Dracula & Van Helsing, Gandalf & Sauron, Batman & the Joker and, more recently, Dumbledore & Voldemort. In all of these tails there is invariably a character “torn” between the two sides of the force; Lancelot torn between his duty to his King and his love for Guinevere, Frodo torn between the need to destroy the one ring and his fascination with its power and Harry Potter with his ability to speak Parseltongue and having one of Voldemort’s Horcrux.

What is interesting in Star Wars (as in Jekyll and Hyde) is that the dark side is manifested in one and the same person; Anakin Skywalker is Darth Vader.

So, what drove some of these fictional characters to the dark side?

Sauron, so Tolkien wrote, “loved order and coordination, and disliked all confusion and wasteful friction” which doesn’t sound particular “dark” to me; however his “driver” was domination – by dominating he could impose order.

Anakin wanted to save his wife and children from death, again not a particularly “dark” thing to want to do; however his driver was his fear of losing them – he also says at some point “if I had absolute power I would enforce peace in the universe”.

In the real world examples of “good & evil” abound, Napoleon & Wellington, Hitler & Churchill, Stalin & Kennedy; I’ll leave you to decide who represents the dark side – or maybe it’s a case of the “dark side and the even darker side”.

So, how does all of this relate to us as leaders?

We all have a dark side, Jung called it our “shadow self”; very much the Mr. Hyde of Dr. Jekyll.

According to Jung, the shadow sometimes overwhelms a person’s actions; for example, when the conscious mind is shocked, confused, or paralyzed by indecision. “A man who is possessed by his shadow is always standing in his own light and falling into his own traps … living below his own level”

The dark side is when proposing become imposing, when suggesting becomes ordering, when assertiveness become aggressiveness, when adaptability becomes unfocused, when cautious becomes rigid, when demonstrative becomes overbearing, etc.

Our “slide” to the dark side is not always obvious and certainly rarely intentional; caught up in the enthusiasm of an idea we want to propose we move slowly from simply proposing our idea to defending our idea, to attacking the ideas of others, to imposing and finally enforcing our idea – and it doesn’t always take three films and a multitude of light sabre battles to get there.

So, what can we do with our dark side, hide it, ignore it and pretend it doesn’t exist or recognise it, accept it and try to master it. Jung believed that “in spite of its function as a reservoir for human darkness, or perhaps because of it, the shadow is the seat of creativity.”

It’s by understanding ourselves and identifying dark side “triggers” and behaviours that we can start to integrate both the light and dark sides of our nature; it’s one of the steps to “individuation” – becoming who you really are.

“The privilege of a lifetime is to become who you truly are.”

Becoming who you are doesn’t just happen because we want it to happen, it needs conscious and constant effort; the sooner you start, the greater the possibility that the Dr. Jekyll in you will win out against your Mr. Hyde!

“The less the shadow is embodied in an individual’s conscious life, the blacker and denser it is.”