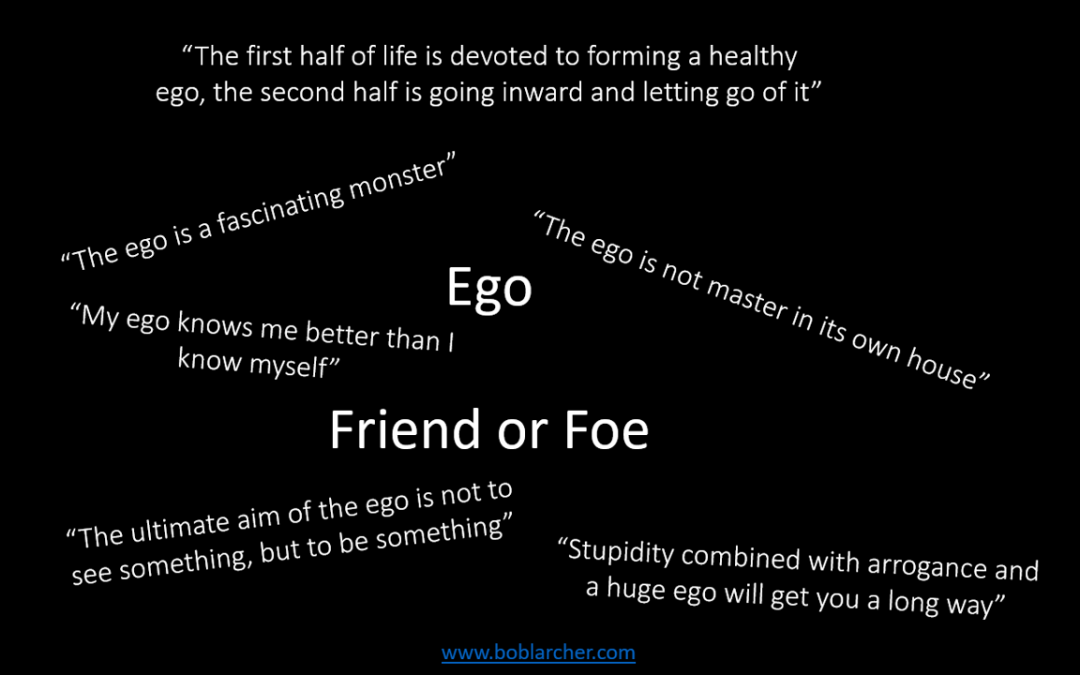 I have recently seen many articles and posts knocking the ego and its role in leadership and I often here expressions like, “his ego arrives before him”, or “she is very ego driven” or “she/he has a very big ego” – and most of them give the ego a negative connotation.

This article is about rehabilitating the ego!!

Ego is defined by the American Psychological Association as, “The aspect of personality involved in self-preservation activities and in directing instinctual drives and urges into appropriate channels.”

According to Freud, the ego is a part (a “construct” in his terms) of the personality that tries to balance the demands of our basic, instinctual drives (the id in Freudian terms), cultural rules (the Superego in Freudian terms) and the external world. The ego prevents us from acting on our basic urges (created by the id), but also works to achieve a balance with both our moral & idealistic standards created by the superego and what society demands.

The super-ego pushes us to act in a socially appropriate manner whereas the id pushes us towards instant self-gratification – and the ego is “caught” between the two!!

The ego operates based on what Freud called the “reality principle”, which works to satisfy the id’s desires in a manner that is realistic and socially appropriate. For example, if someone cuts in front of you in traffic, the ego prevents you from chasing down the car and physically attacking the offending driver; the ego allows us to see that this response would be socially unacceptable.

So it seems that there is a good side to the ego and it sounds like we ought to have one! A big one?  A small one? A balanced one?

Interestingly, psychologists use ego very differently from laymen. In fact, it is used in an almost completely opposite way to that of laymen (and laywomen).

For psychologists, having a “big ego” seems to be a good thing; having a big ego refers to having an ego that can maintain the balance between the id and the superego. Having a large ego means not giving in to personal desires or to what society “expects”; some would say “it keeps us on the straight and narrow” I prefer to say “it keeps us “aligned”. A big ego helps us to avoid becoming “corrupted” by power, possession, pleasure, etc. and it also helps to avoid “conforming” to external expectations. A “small ego” could mean either giving into to social demands and not rocking the boat or becoming a “Mister Hyde” and not giving a damn about anyone; something we all do occasionally and something that some people do a lot!

According to Jim Collins, “Level 5 leaders channel their ego needs away from themselves and into the larger goal of building a great company. It’s not that Level 5 leaders have no ego or self-interest. Indeed, they are incredibly ambitious – but their ambition is first and foremost for the institution, not themselves.”

So; after all that, is our ego a friend or a foe? Should we cultivate one or try to avoid it? What do you think?