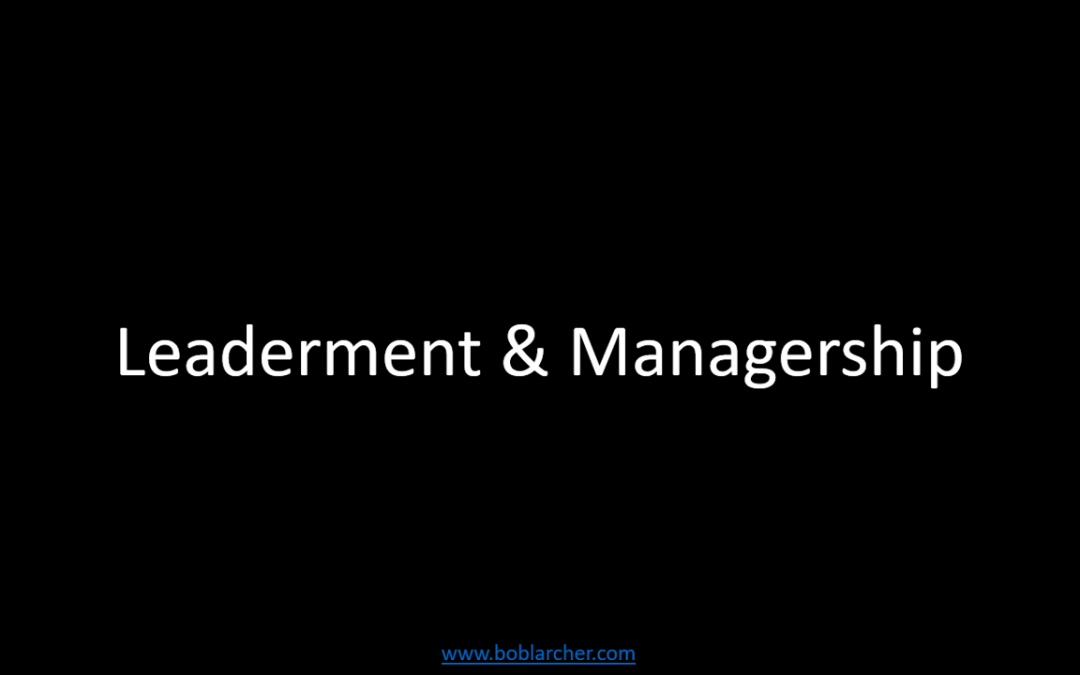 This article is an attempt at a definitive understanding of what leadership and management are all about.

Leaders & managers are people and leadership & management are things people do.

The origins of the word lead seem to lie in Old English, Old Saxon and Old German with words such as “laedan”, “ledian” and “leiten” all meaning, essentially, “to show the way”.

The addition of the suffix “er”, transforms the verb (to lead) into a noun and gives leader, i.e., someone “who shows the way”.

The origins of the word manage seem to lie in the Latin word “manus”, meaning “to take in hand”.

Again, the addition of the suffix “er”, transforms the verb (to manage) into a noun and gives manager, i.e., someone, “who takes things in hand”.

Replacing the suffix “er” with the suffix “ment” (meaning to make concrete), gives management, i.e., “taking things in hand and making them concrete”.

If we follow the logic of the above, this gives us two quite different concepts, one, maybe more abstract, related to showing others where to go and the other, maybe more tangible, related to how to get there.

Clearly, in days of Yore, someone guiding people across dragon infested mountains, would need both the ability to motivate others to keep going and the ability to ensure supplies, horses, accommodation and the like for the journey.

So, where does that leave us today?

Many leadership definitions include terms such as influencing, motivating, encouraging and empowering; the GLOBE study defines leadership as, “the ability of an individual to influence, motivate and enable others to contribute to the effectiveness and success of the organizations of which they are members”

Management definitions include activities such as planning, organising, directing and controlling and is often defined “a set of activities directed at the efficient and effective utilization of resources in the pursuit of one or more (and often, organisational) goals”.

Again, these definitions make a distinction between, “creating a desire to go somewhere” and “providing the resources to get there”

Leadership and management seem to be two fairly different, albeit related, activities

But what about leaders and managers? Do leaders lead, while managers manage?

The idea of being “in first place” came about in the fifteenth century and the meaning “the front or leading place” is from the sixteenth century when, interestingly, it was actually stigmatized as a low, despicable word.

The modern noun manager seems to have been heavily influenced by the Old French word “manège” (which itself came from Italian maneggio), meaning “to handle, touch,” especially “to control a horse”. It was used in the early eighteenth century to designate someone “charged with conducting a house of business or public institution”.

Today we often read that managers need to influence and that leaders are responsible for, or in control of, a group, organisation, country etc.

Leader and manager seem to be fairy interchangeable in the business world; I’ve worked with Project managers & project leaders, team leaders and team managers, programme leaders & programme managers – and they all seem to have similar job descriptions with aspects of both leadership & management.

However, when it comes to departments, it always seems to be department manager, I can’t recall working with someone with the title “department leader”.

As you move up the corporate echelons, we get Heads of, Directors, Managing Directors, Vice-Presidents, Presidents, CEO’s, Chairperson ……..