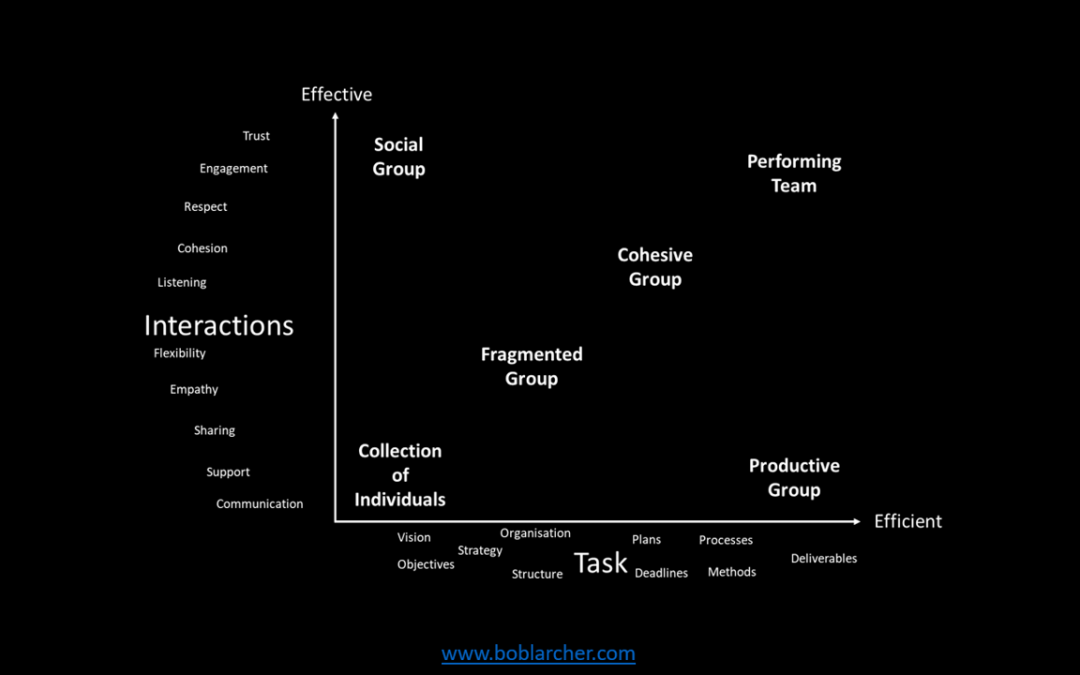 “Great things in business are never done by one person. They’re done by a team of people.”

So, is there a “road” that will lead to the high performing team?

Clearly, high performance within in a team isn’t instantaneous; a collection of disparate individuals needs time to become a cohesive and supportive whole, heading in a common direction. The journey from “forming” to “performing” is not linear, it is not timebound and the destination is always changing.

Virtually all team development models identify four common “phases” or “configurations” that teams go through in their search for the holy grail of team performance.

An initial phase of getting to know one another and understanding what the team is about.

The starting point for new teams. Depending on the model chosen this phase goes under a variety of names, forming phase, polite phase, orientation phase, etc. Team members will be attempting to learn what the organisation expects of them as a functioning team, what their tasks are, how to do them and what the standards are. In this low level of team maturity phase, low levels of task productivity and a great deal of leader dependency can be expected.

Team members will generally be mildly to moderately eager to engage, have generally positive expectations, and show some anxiety about the task and each other.

You can expect to see a certain lack of involvement & commitment, one-way communication, hidden feelings and poor listening.

During this phase the Leader needs to be “out in front”, providing a vision for the team and clarifying expectations about how the team process will be initiated. Communication will be primarily one-way from team leader to team members.

Time needs to be allowed for team members to get to know one another, build a shared purpose/mission and continuously clarify team outcomes while working on personal commitment by linking personal goals to team roles; this will help the team to start to move forward on its journey.

A divergence phase where “like-minded” sub-teams or cliques are formed.

Success is often due to the efforts of a “clique” and is not a real collective success.

You would expect to see a lack of cohesion, inconsistency, conflicts with team members appearing confused and expressing concern about the objectives or the organisation of the team.

The team leader needs to concentrate less on being “out in front” and become a “facilitator” helping them focus on goals & expectations, managing process and conflict, generating ideas, and explaining decisions.

A coming together phase with a realisation that the team needs to share in order to move forward.

This, “Norming” or “Cohesive” phase is where the team begins to generate its own culture or accepted understandings about how things are done. Team norms may be overt and written, like ground rules, or unspoken, unacknowledged practices that arise. It is in this phase of the team’s development that the individuals start to feel like a “collective.” Team members share information, ideas and perceptions as they emerge and a consensus is sought as to how to become truly effective.

In this phase the leader is more “alongside”, acting primarily as a coach providing encouragement, helping to build consensus, and giving feedback.

Teams often find themselves in the productive team configuration when they have sacrificed the human element in favour of getting stuff done. The team will probably be producing under difficult interpersonal circumstances and be dependent on the formal team leader; they will probably rely on the over application of processes and procedures.

Low morale, lack of empowerment, resentment and, in many cases, high turnover are often the tell-tale signs.

Teams often find themselves in the social team configuration because they have overly concentrated on relationships to the detriment of delivering on their objectives. Team members tend to become tightly knit with a feeling of trust and ”we-ness” within the team; there is often a lot of interpersonal support and effective communication will usually exist but with little real task accomplishment.

The tell-tale signs are conviviality, understanding, sharing, mutual helping and cohesion; a certain degree of flexibility may be apparent.

The whole team development process is not a linear, mono-dimensional journey. Teams can accelerate, become derailed, fall-back, get lost and, in some case, implode and disintegrate.

What is paramount for the team leader is to be able to fully endorse the different “roles” or “styles” of leadership depending on where the team is in its development; out in front showing the way forward in the early stages, facilitating and creating “weeness” as the team starts to move forward, coaching from the side-lines to empower the team as it starts to become cohesive and finally aligned with the team when it becomes a performing team.

Collections of individuals or groups masquerading as teams can be found at all levels of an organisation; from the production team to the board team and everywhere in between – sales teams, project teams, support teams ….

Measuring a team’s performance and mapping its development is clearly not an exact science, if indeed it is a science at all. However, there are ample frameworks, models and research that can be used to contribute to concrete improvements in how people work together.

These models and frameworks integrated into a coherent team development process, as opposed to a series of “stand-alone activities” can significantly accelerate team development and performance and help teams through the critical stages of their life together.