What exactly is team building? 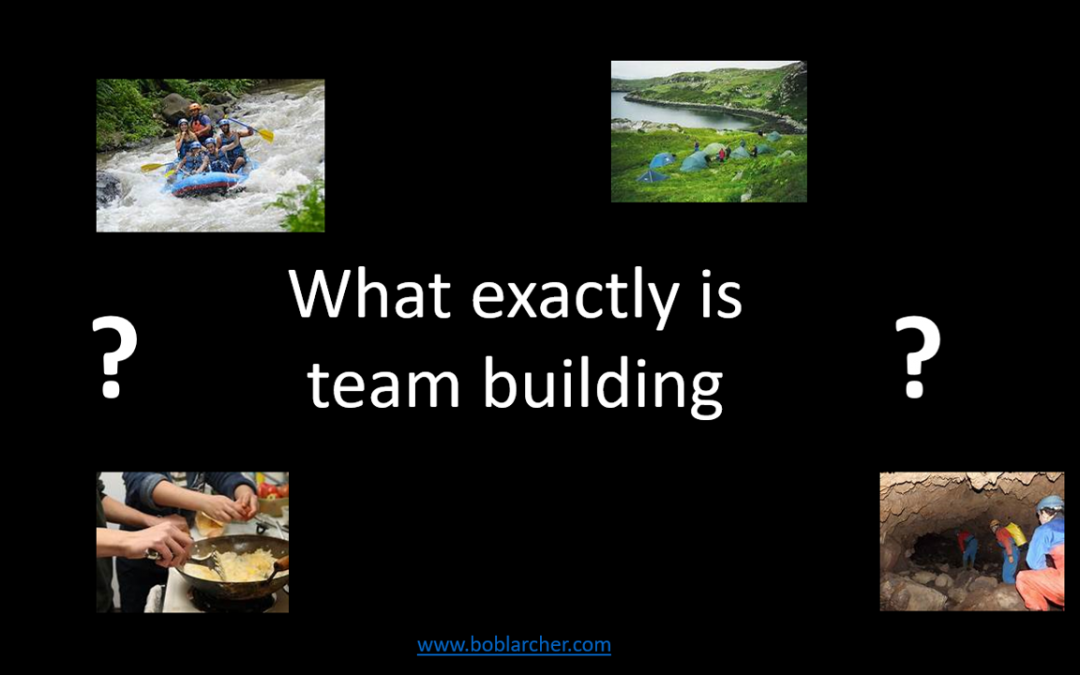 I ran my first team building in 1987 and I have lost count of how many I have run since – for project teams, change teams, sales teams, management teams…….

Before we try to understand what teambuilding is and what is meant by it, here are a few lines on the meaning of the word team.

A team is a collection of individuals who share their skills to achieve a collective objective(s) for which there is a shared responsibility. Therefore, a team cannot represent an entire company, an entire department, or (necessarily) an entire service; there are many “groups” in companies that present themselves as a “team” without really being one (see my previous article “When is a team not a team?”)

So here is my definition of the term team building, “Team building is a process that helps to strengthen the cohesion between team members in order to create a favourable working environment such that the team can effectively & efficiently fulfil its objectives“.

Team building is not a cooking class, nor a training course in the desert, nor a journey through the branches, nor a murder party; even if each “activity” can have its place in a team building “process”.

Cooking together and then eating what has been prepared is undoubtedly fun and should allow participants to have a good time and get to know each other better, but it remains a team building activity; if the objective is simply to have a good time together and allow participants to get to know each other better, then, why not. On the other hand, if the objective is to allow the reinforcement of cohesion between the members of a team and to create a favourable work environment by integrating individual fulfilment and collective success …… there is still work to be done.

In my almost thirty years of experience, I have used almost every activity imaginable; caving, cooking, rafting, bivouac, theatre, treasure hunting, canyoning, music, rafting, etc. and all these activities are for me completely legitimate in a team building process; but without the process, the activity remains (quite often) a rather pleasant “one shot”; leaving a good memory – but without a real impact on the functioning of the team.

In order to understand the team building process it is necessary to understand how a team can move from being a “group of individuals” to being a “high performing team”.

Putting a collection of individuals together and giving them a name and a task to carry out may make them a team somewhere on the organizational chart. However, the reality is that becoming a real team takes both time and substantial active involvement of its’ members; it requires both mutual and individual accountability and it requires well-developed interpersonal skills.

Teams grow in terms of WHAT they do; over time the team clarifies its mission, objectives & strategy, it becomes organized & structured, plans and deadlines are defined, processes and methods are established, and deliverables are produced – all of this allows the team to become “Efficient”.

Teams also grow in terms of HOW they do; over time team members become supportive and sharing, listening allows empathy to develop, communication becomes increasingly fluid which leads to greater flexibility, mutual respect, engagement and, finally, cohesion and trust – all of this allows the team to become “Effective”.

The true high performing teams be they full-time, part-time, remote or other are the “E2 teams”; teams that have integrated both what they do and how they do.

This development can be modelled with the grid below; on the top left are the groups are the “caring & sharing” groups with a good atmosphere but who do not produce much, on the bottom right are the “lean & mean” groups who produce but often in a “difficult” atmosphere and on the diagonal is a kind of balanced road to performance – Tuckman’s famous, Forming, Storming, Norming and Performing.

Measuring a team’s performance and mapping its development is clearly not an exact science, if indeed it is a science at all. However, there are ample frameworks, models and research that can be used to contribute to concrete improvements in how people work together. These models and frameworks, integrated into a coherent team development process, as opposed to a series of “stand-alone activities”, can significantly accelerate team development and performance and help teams through the critical stages of their life together.