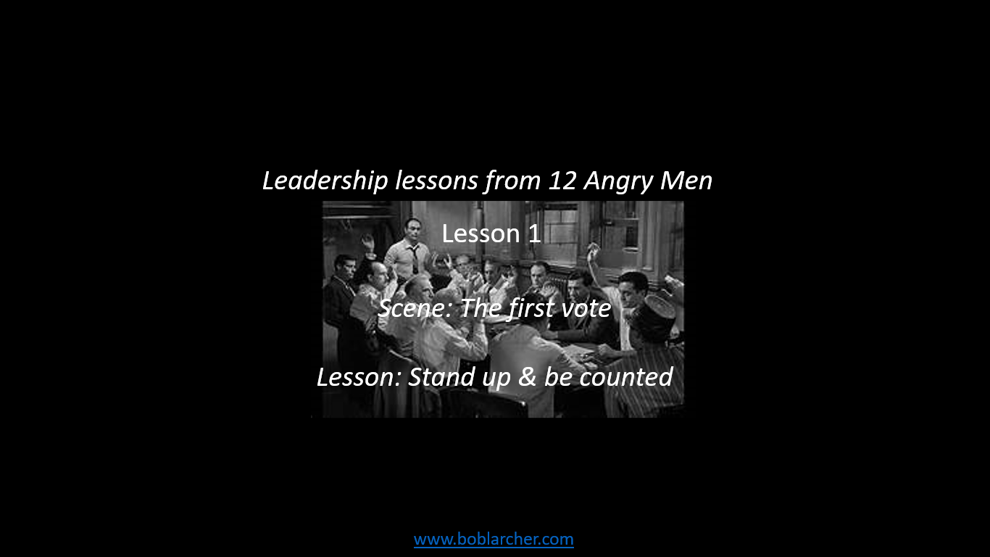 If I have watched the film “12 Angry Men” once, I have watched it a hundred times; I use it regularly in my leadership seminars, getting participants to watch it before or between modules and then debriefing it collectively.

The film is a leadership seminar in itself.

This lesson, “standing up an being counted”, is quite possibly the essence of leadership.

In the film, eleven people have voted “not guilty” and it just needs one more vote for the offender to be condemned to the death penalty; however, the one more vote doesn’t come. When asked, by the jury chairman, “and who votes not guilty”, juror n°8 unhesitatingly raises his hand – unlike some of those who had voted guilty.

Going against the current is never easy, everyone is convinced of the idea or decision and you are not sure; what do you do? Do you “go with the flow” or do you put your hand up and be counted?

You think you are doing something “noble” in standing up for what you think is right and, almost immediately, people start to “shoot you down”.

Making a stand for something you believe in is a real hallmark of leadership; Lincoln, MLK, Gandhi, Jaures and many others all stood up for what they believed in and they were all shot down.

Standing up and being counted doesn’t necessarily mean getting assassinated, but it will undoubtedly get you a lot of diatribe and people digging into the smallest “mistakes” you committed in the past.

Recent examples are people like Great Thunberg and Jacinda Ardern; both criticized and ridiculed by those unable to counter their arguments.

You do not have to be a saint to incarnate your leadership, but you do need to be prepared to suffer the “slings and arrows” when “taking arms against a sea of troubles”