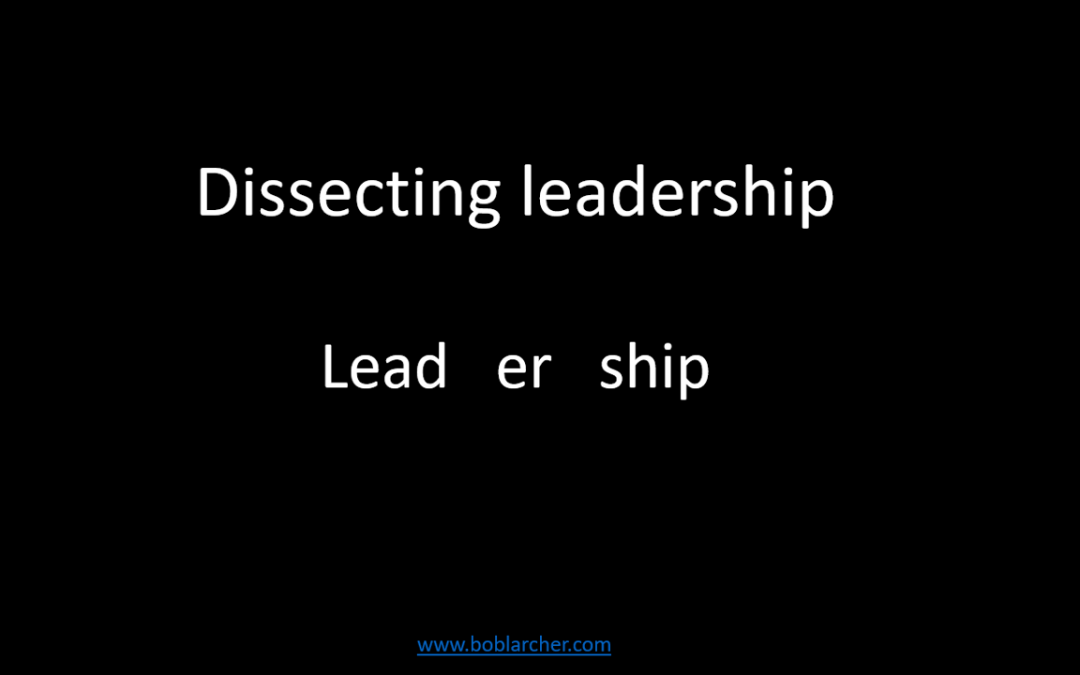 The first syllable is from the verb, “to lead”

The origins of the word lead lie in Old English, Old Saxon and Old German with words such as “laedan”, “ledian” and “leiten” all meaning “to take with one” or “to show the way”.

The second syllable “er” is a suffix and is used in the English language to create nous from verbs; so, a leader is someone who is “taking people with them” or “showing the way”

The final syllable in leadership is the suffix “ship”. This comes from Old English (sciepe) and means, “the state or condition of being something”; used in words such as craftsmanship, friendship, sportsmanship, etc.

Serious writings about leadership started to appear in the fifties and sixties (1950 & 1960 that is) with the works of people like Fiedler, Bird, Stodgill, Blake & Mouton and Tannenbaum & Schmidt. This was followed by a plethora of models & theories in the seventies with people like Hersey & Blanchard, John Adair, Robert House, James Burns, etc.

Here are some leadership definitions from leading (no pun meant) leadership authors:

Warren Bennis said, “leadership is the capacity to translate vision into reality” and Bill Gates says that leadership is about “empowering others”.

A commonly used definition (although I’m not sure where it comes from) is, “leadership is a process of social influence, which maximizes the efforts of others, towards the achievement of a goal”

I’m not saying that positional leadership is just management dressed up to look like something else (and I’m not saying that it’s easy) but leadership in the business world is very rarely purely about influence; CEO’s (leaders) in organisations don’t get things done simply by influencing others, they wield a lot of position power – they may not order people to do things but they can “strongly recommend” what should be done. Project leaders in organisations may not have direct reports, but they have (usually) been empowered by the organisation and have a mission letter in terms of running the project.

When I look at “great” leaders, people who I consider to incarnate real leadership, I find very few references to double digit EBIT, increased shareholder value, market penetration or ROI; I do however find a lot of references to human values and improving human conditions – “Education for all”, “Colour Blind America”, “A Rainbow Africa”, “A United India”, “Everyone a Changemaker”, etc. This is often something for which the person has no mission letter and no “official” remit.

Don’t misunderstand me, I’m not denigrating leaders and what they do in the business world, nor the difficulty they have in doing what they are doing (I spend a lot of my time with business managers trying to help them be more effective in what they are doing); but in my opinion we need more real leadership and not just a leadership that is concerned with getting the latest gadget to market on-time and assuring a competitive edge!!

We need more people willing to “stand up and be counted” and take on the real leadership challenges with regards to the political, social, environmental, financial, etc. issues facing the world today.

We might possibly need less leaders and more leadership!