A brief history of Mental Toughness 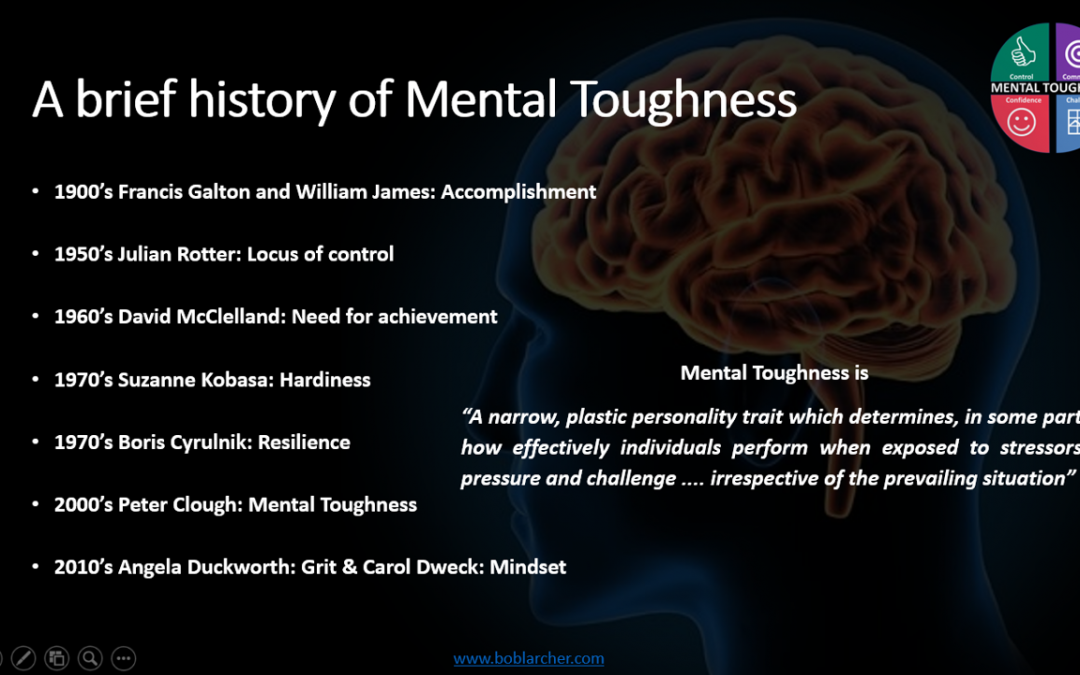 I hear a lot of people say, “oh Mental Toughness, another fad”.

If it is a fad, then it is probably a fad that has been around since the dawn of time; those cave men and women who survived the sabre tooth tiger and freezing winters were (without knowing) undoubtedly mentally tough.

Charles Darwin’s famous quote, “It is not the most intellectual or the strongest species that survives, but the species that survives is the one that is able to adapt to or adjust best to the changing environment in which it finds itself”, quite possibly has its roots in Mental Toughness.

The first attempts to understand Mental Toughness were in the 19th Century with people such as Francis Galton and William James looking into aspects of what they called accomplishment.

Galton, the Victorian psychologist and psychometrician (considered to be the founder of psychometrics) studied “Greatness” and James (the father of American psychology) in his book “The Will to Believe” wrote about having “faith in one’s own ability to accomplish tasks” and “adopting a believing attitude”. Both were clearly looking at the “attidudinal” aspect of what today we call Mental Toughness.

In the 1950’s Julian Rotter developed the concept of Locus of control, based around the notion that we have either an internal belief or external belief about the degree of control we have over our lives; internal being a belief that we can control our own life and external being a belief that our life is controlled by outside factors which we cannot influence.

The “can do” attitude and the extent to which you believe you control and shape what happens to you is a cornerstone of Mental Toughness today.

In the 1960’s David McClelland developed (based on the work of Henry Murray) the “Need for accomplishment” theory and talked about “high need achievers”, saying that they tend to set moderately difficult goals and take calculated risks as well as having a strong desire to assume personal responsibilities for performing a task and finding a solution to a problem. It is not difficult to see links between McClelland’s work and the notion of “stickability” and the extent to which you will  make promises and keep those promises.

In the 1970’s Suzanne Kobasa introduced the notion of Hardiness following her studies (with Salvatore Maddi) of students at the University of Chicago. Kobasa’s identification of three “general dispositions” (commitment, control and challenge) set the foundations for what we know as Mental Toughness today.

In the 1970’s, the notion of Psychological resilience also gained popularity thanks to the work of people such as Aaron Antonovsky and his work on coping and Emmy Werner and her research into the “protective factors” in the lives of resilient individuals.

In parallel to the above there have been many contributions, especially from the world of sport, from people such as, Jim Loehr, Daniel Gould and Daniel Gucciardi, to name but a few.

In the 2000’s Professor Peter Clough pulled together much of the above and developed a comprehensive model of Mental Toughness; the 4C’s (Control, Commitment, Challenge & Confidence), which today has become very much the “industry standard” and an international benchmark.

Research into Mental Toughness has clearly not stopped, Clough himself “revisited” his initial model and identified new sub-dimensions within Commitment and Challenge, and others, such as Angela Duckworth & Carol Dweck and their work on Grit & Mindset have also contributed to our understanding of the impacts of Mental Toughness.

As I wrote at the beginning, if Mental Toughness is a fad, it’s a very sustainable fad.

As long as we need the confidence to take on a challenge and the control to meet our commitments, Mental Toughness will remain an important element in “determining, in some part, how effectively individuals perform when exposed to stressors, pressure and challenge …. irrespective of the prevailing situation”.